Our bus picked us up at about 8 AM, and we rode east — a lot farther than we thought we were going. The long ride over gravel roads gave Mrs. Moses some car-sickness, which she handled like a champ. We were heading to the Beagle Channel en route to Gable Island. 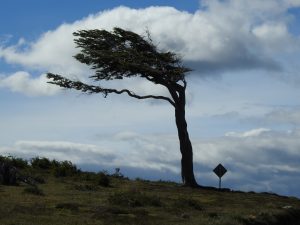 We started the trip with rafting, except this time we had a very different group. Our raft consisted of a German couple, two French women we met on yesterday’s hike, an older couple from Washington D.C, and Marcy and me. I was appointed the captain, which meant that I was supposed to sit in the back of the boat and steer. 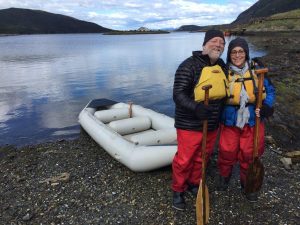 I will admit at the outset that I didn’t really know how to steer. I was given some rudimentary instructions, which didn’t seem that complicated. Everyone else was supposed to row in sync. My lack of experience did not help to compensate for what transpired. But I maintain that I share only part of the blame.

About a minute after we launched, the Germans decided not to row, because “the current was moving us.” The elderly D.C. couple tired out immediately and alternated between not rowing and casually dipping their oars in the water. The French were not rowing very hard but put a great deal of effort into yelling at the Germans to paddle.

I will describe the raft’s path through the water as similar to a dud firework in slow motion; spinning in a seemingly random and dangerous way. There were sharp branches overhanging the shore which hurtled toward us. The other raft, which mostly consisted of a family of 6 from Argentina and a true river guide, stopped paddling to watch us. And even though they stopped paddling, they were still moving downriver at a faster pace than we were.

Our rafting guide wisely decided that he needed to transfer to our raft and the two French women needed to move over to the other raft. Or maybe it was unwise because he quickly saw that we had a huge labor shortage and he had to do a lot of “compensation” paddling. I don’t think I’m exaggerating when I say that on the rest of the raft trip, the guide and Marcy and I were the only ones who were actually rowing.

We finally got to our destination, which was the Beagle channel. The sun was out, we had blue skies, and the temperature was pretty mild. We lucked out with the weather. A motorboat was waiting to take us across the channel to Gable Island, where lunch was waiting. Expertly grilled fish, beef, vegetables, and well-earned red wine.

After lunch, the man from D.C. said he’d heard that we did a similar trip yesterday. I said that we had. He then asked, “Why would you choose to do it again?” It was not what he thought he’d signed up for.

We then started the second part of the day, our hike. I really liked this hike, because the trail took us across the island, from the south end to the north end. Unlike yesterday’s hike in a national park, this one had no markers or signs. On the entire hike, we never saw another person; we had the whole island to ourselves. Like yesterday, no man-made noise. Pure nature. Marcy’s comment was that this is what the earth is like when people don’t spoil it. 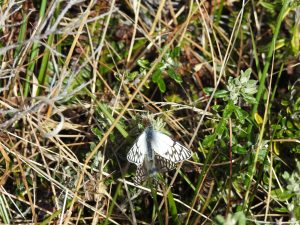 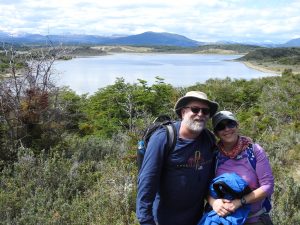 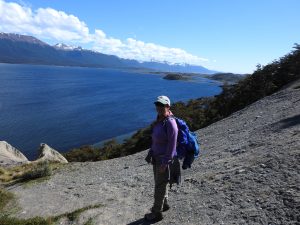 When we finished the hike, the boat was waiting to take us to Martillo island. As we pulled up to the shore, we saw several Magellanic penguins. They had already hatched their eggs and were protecting them, and we weren’t allowed to walk up to them, but we got pretty close. Penguins are one of those animals (like giant pandas) that are so unusual that they don’t seem real. I’d seen them in aquariums and zoos, but it was surreal to just see them hanging out in nature and doing their thing. 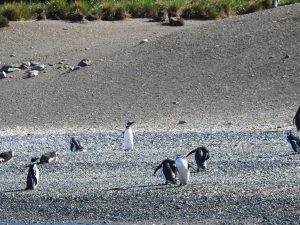 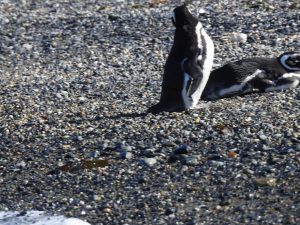 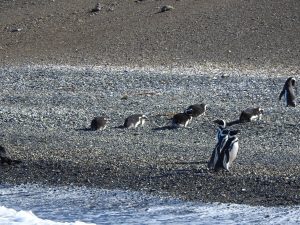 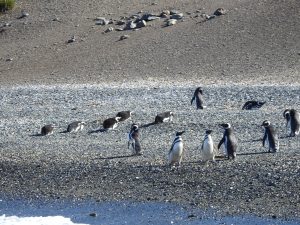 I haven’t really written that much about Ushuaia, other than it reminded us of the 90’s TV show Northern Exposure. We’ve been heading downtown in the evenings to eat dinner. It’s touristy, but it’s also a pretty cool place. The thing that strikes me about it is you can look in any direction and it looks like a postcard. Water, mountains, and buildings of every hue make for a really beautiful city. Heading home from dinner, we caught an amazing sunset, with a sky filled with purple, pink, orange, and several colors in between.