Today we spent the day at Tierra Del Fuego National Park. We started the day with a hike. Our group consisted of 13 hikers, our guide Joaquin, a paddling guide, and our driver. The 13 of us were from France, Holland, Australia, and the USA. There was one other couple from the US (Denver), but about half the group spoke English.

The trail clung to the shoreline for most of its length and alternated between rocky terrain, grass plains, and forest.  I’ll let the pictures describe what everything looked like. Joaquin knew quite a bit about the native trees and other plant life. When he’d see something that was edible, he would pluck it and pop it into his mouth. Marcy was pretty daring and matched him whenever he offered.

The hike was 7 km or a little over 4 miles. Some of it was fairly easy and some of it was pretty strenuous; long climbs and switchbacks. At the end of the hike, we were tired and sore. We had lunch in a pretty large dome tent — roast chicken, rice, and red wine. 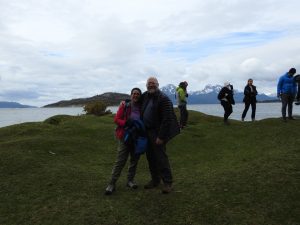 The hike was unique and it was amazing being surrounded by 360 degrees of postcard-perfect scenery. The forest was super quiet — no squirrels, no bugs, no snakes, no spiders, no mosquitos — very different from a hike in Georgia. The only wildlife we saw were birds, with one exception — we saw a seal at one point during the hike. 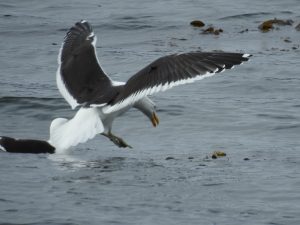 We then took a short bus ride to where our rafts were waiting. They gave us waterproof boots and pants and life vests. Yeah, we looked pretty ridiculous. That part of the trip was great because of the scenery. It’s been a while since we rowed like that, and whatever muscles we had that weren’t sore from the hike now joined the ones that were. We finished paddling at Ushuaia’s southernmost point, the “bottom of the world.”

We had dinner with a couple from Denver who we met on the hike.  We ate at an excellent restaurant that they had been to the night before. Argentinians claim that their steaks are the best in the world, and based on the steak I had, they might be correct.