Today was a travel day.

I was dreading the redeye flight from Atlanta to Buenos Ares. The memory I have of the last redeye I took was of a long night of half-sleep and feeling like death warmed over when I staggered off the plane. But on this flight, we were sitting in Delta’s Comfort Plus seats, and they were roomy and (per their name) pretty comfortable. Pam & Mark’s last minute suggestion to procure a decent pair of eyeshades (plush, large, comfortable) and to wear something light with a hood was a good one. Along with these very weird “turtle” wraps, fabric and velcro and internal plastic which wraps around your neck and provides a support to rest your head on, we were enveloped in a soft, warm, and dark cocoon for the flight. I can only imagine what we looked like, but neither my traveling companion (the lovely Ms. Hotrock) or I cared; we were able to get some sleep and deplaned in pretty good shape.

It was a 10-hour flight, almost due south. We then caught a cab east for a long (90 minutes) ride to the “other” Buenos Ares Airport (AEP). Hot weather. Windows rolled down. A soccer game blaring on the radio. Bumper to bumper traffic. Our driver somehow tapped the car in front of us. Both drivers got out, looked at the bumper, shrugged, and got back in the car. Traffic was moving so slow that it didn’t matter. It was exactly as much fun as it sounds.

I can’t say we saw much of Buenos Ares. There were a lot of billboards, and I could only guess from the pictures what they were advertising. The most common theme seemed to be ham and cheese sandwiches. I did notice something different about the cars on the road, but it took me a while to figure out what it was: none of them were Japanese. There were a lot of Fords, Chevys, and VWs. Next most popular were Peugeots and Fiats. But not one Toyota. I did see two cabs that were Honda Fits, but those were the only Japanese cars. Compare that to Atlanta’s roads, and it was pretty odd.

At the AEP airport, we ate lunch and waited for the next leg. We would be flying 4 more hours south to the southern tip of South America, to a town called Ushuaia (Oosh-oo-why’-ah). Waiting for our flight at the airport, we noticed that the travel agent’s itinerary had our arrival time wrong by several hours, and we worried about whether our driver would be there to pick us up. We attempted to call their customer service line in Chile. After many failed dialing attempts, Marcy got through to Verizon and we learned that we had to specifically request the countries we would be allowed to call. They made some changes to her account, and she was able to reach someone and straighten it out. We also had a view of the beach and the Atlantic Ocean, which had odd and unpleasant hues I can’t even describe, so I took a picture of it. It was *not* the beautiful blue of the Caribbean.

Taking off from Buenos Ares, we got a good look at the city from the air. I’m amazed at the massive scale of it all. From the air over AEP, it reminded me of the death star from Star Wars — miles and miles of buildings, in all directions, as far as the eye can see. Honestly, it looked like a kind of fake CGI effect. I wish I’d taken a picture. It seems like a good city to live in if you wanted to disappear. Like Bin Laden in Pakistan, or maybe the Nazis after WWII?

I’m writing this from the plane, on our way to Ushuaia. They served a snack on the plane — ham and cheese sandwiches (!). 20 hours into the trip, and we are wearing the same clothes as when we left. We are cruising over a perfect white sea of clouds and will be descending soon. The hot weather of Buenos Ares will be replaced by weather in the forties in Ushuaia, because we’ll be at the bottom of South America, not too far from Antartica.

After we landed, our driver was there waiting for us (yes!), and on the ride to the Hotel Tolkeyen, he told us that in the early, early days the hotel was the only thing in Ushuaia.  So, yeah, it’s a pretty old place.  “Charming” would be the euphemism here.

We took a shuttle to the downtown area (“centro”) and had dinner at a place with some really cool art. 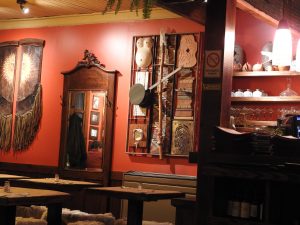